Arrangement for a Silent Orchestra 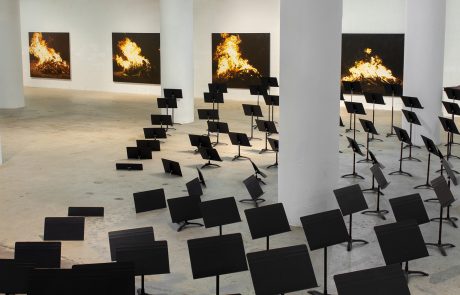 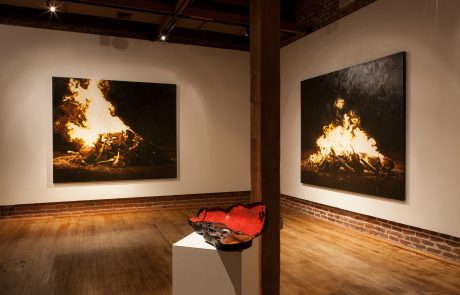 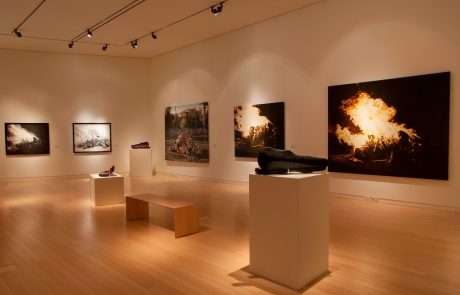 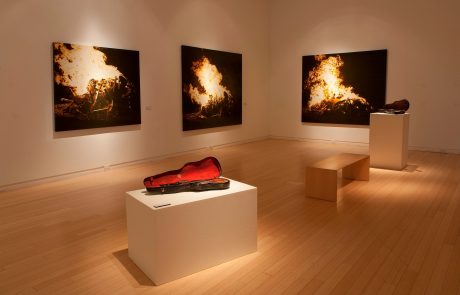 As the only child of a piano teacher, I was instructed at an early age to choose an instrument and stick with it. At age eight I selected the violin, and at eighteen I put it down. The years between were fraught with accomplishment and ambivalence; as a child, I excelled at the violin, but as I approached adolescence, lessons and practice became increasingly obligatory. Since then, the violin has shown up in a recurring dream: I stand on stage at a recital and the pages on the music stand are blank, I have no memory of the melody, and the ensuing silence is paralyzing. The violin has reappeared periodically in my paintings, and its image has become central to my personal iconography. I have come to discover that the instrument connotes a larger emblem of cultures and traditions not bound by class or ethnicity.

We are all haunted by our unrealized pursuits, and anxiety is the material of our collective nightmares. I am interested in both iconography as a social construct, and the images that endure in our collective memory. How does personal observation inform collective experience? How are images tied to memory and social consciousness? And what is the role of pictorial representation in visual culture?

For a period of nine months I solicited instrument shops nationwide for violins beyond repair. After collecting nearly one hundred violins, I piled them in a mountaintop clearing and burned them at dusk. Observing the site from six o’clock p.m. to six o’clock a.m., the documentation of the event is the source material for the series of twelve large-scale paintings that depict the pile of violins in various phases of ruin: at sunset, illuminated by the lowering sun; at nightfall, in stages of burning; and at dawn, the charred remains. A video accompanies the paintings, documenting the pile from sunset to sunrise.

From the parable of the burning bush to the tradition of burning books, burning is a symbolic act, if sometimes a regrettable one. While the violin is personally significant to me, I am concerned that its value is becoming obsolete to later generations. Due to increased emphasis on technology and decreased emphasis on the arts, youth are less likely to learn to play an instrument in school, attend the symphony, or experience live performance. On this trajectory, subsequent generations would be less likely to pass values of musical heritage onto their children; we are at risk of its eventual loss.

To re-familiarize myself with the instrument after an eighteen-year hiatus, I resumed violin lessons and incorporated music practice into my studio practice. The exhibition of this project includes a personal performance of Beethoven’s Romance for Violin in F Major Op. 50, from the Romantic period, that of Francisco de Goya, whose historic paintings inspired my images.

Departing from and expanding upon my former work, Arrangement for a Silent Orchestra propels my practice into the future. Whereas my past paintings and drawings were fragmented narratives along sociopolitical themes, this project returns to my earlier interests in metaphor and allegory. My prior work was largely figurative, and now the figure is omitted; the absence of the figure emphasizes the viewer’s own relationship with the objects. And this is my first project that includes a video component to ground my paintings in the concept of time.

Supported in part by a grant from the Arizona Commission on the Arts which receives support from the State of Arizona and the National Endowment for the Arts.