Arrangement for a Silent Orchestra: 28° F 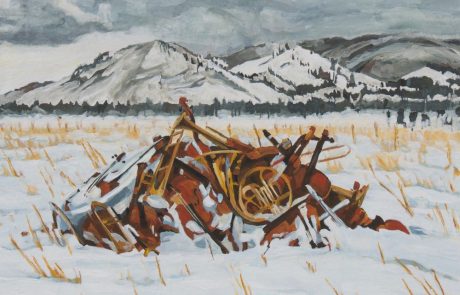 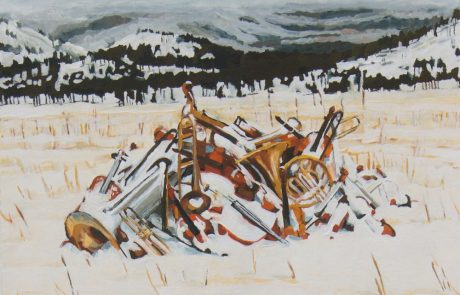 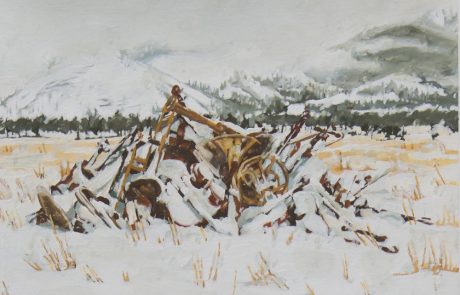 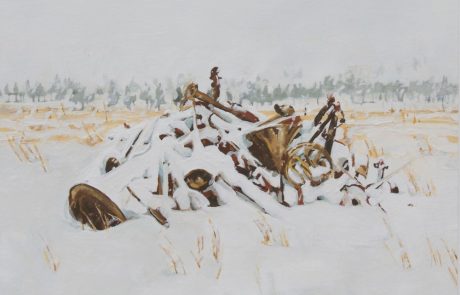 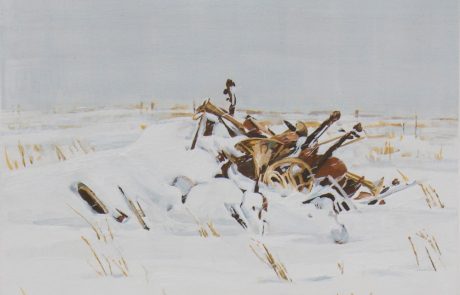 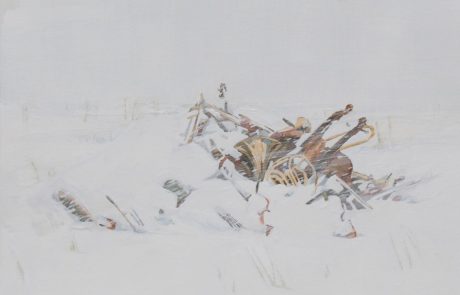 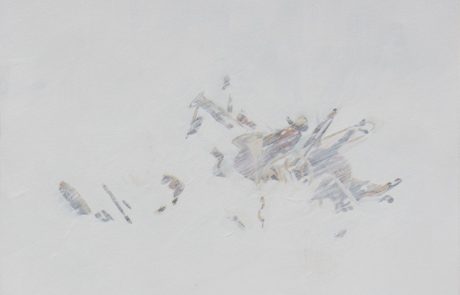 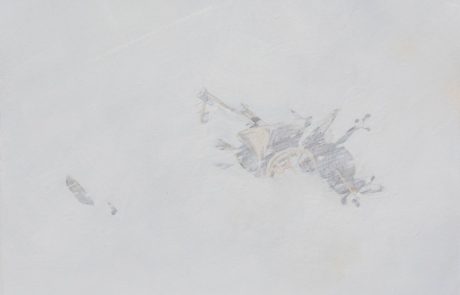 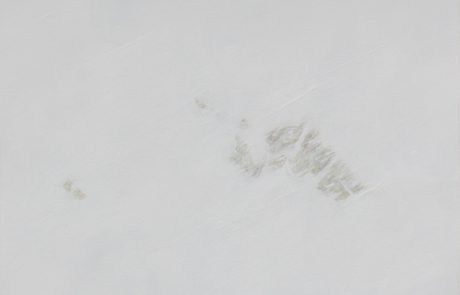 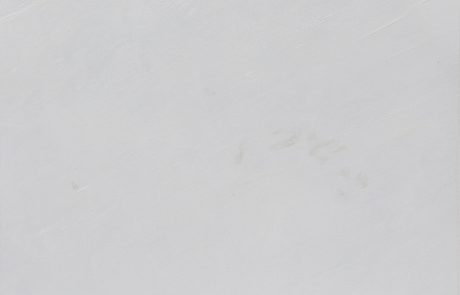 Originally exhibited under the title Arrangement for a Silent Orchestra, the second phase necessitates a subtitle, hence the designation 28° F (temperature for snow accumulation).

The first phase involved the nationwide solicitation of a hundred violins, beyond repair, which were piled in a mountaintop clearing and burned at nightfall. The documentation was the source material for ten large-scale paintings and a video depicting the pile of violins in various phases of ruin. In the second phase, symphony instruments are piled in a remote landscape and an ensuing snowstorm gradually covers the instruments with snow. This event is depicted in a new series of paintings and video.

Whereas the incineration of violins was a controlled event—an intentional pyre—exploring the influence of culture, I am also interested in the influence of natural circumstances—or environmental impact—on heritage. During the painting of the burning violins when I was focusing on the behavior of fire (motion, heat, translucency, sound), I was regularly contemplating the character of fire’s atmospheric antithesis: snow (tranquil, cold, opaque, silent). If violins are to an orchestra as kindling is to a fire, so are trombones to a symphony as metal is to corrosion.

For Arrangement for a Silent Orchestra: 28° F, cast-off symphony orchestra instruments are piled in a remote landscape against a turbulent grey sky and approaching snowstorm. Depicted in a series of paintings and accompanying video, the ensuing storm will gradually cover the instruments in snow. With the landscape becoming less distinct as falling snow reduces visibility, so Save will the imagery sequentially diminish in clarity, obliterating the recognizable landscape and instrument forms. Accordingly, the series of nine large-scale oil paintings transitions from representational imagery to non-objective abstraction. As the storm subsides, the series returns to clarity and realism, revealing the snow-covered pile of instruments. The accompanying video documents segments of the event, revealing glimpses of the instruments between periods of whiteout conditions.

The significance of the inclusion of instruments beyond violins—strings, woodwinds, brass and percussion—is two-fold: material and sound. The flammability of wood objects is suitable for burning, whereas wood and metal both degrade in water. The contrast between sound and silence is an integral component of the project, with the implied noise of so many loud brass and percussion instruments quieted by the very condition of their un-use. This sense of silencing is further heightened by a muffling blanket of snow. While in the paintings the concept of silence is pictorial, in the video the soundtrack captures the subtle sounds of a snow squall, which are faintly audible alongside the paintings in exhibition.

As the scenery changes, so does my process. While my work has typically been grounded in representation, this project challenges my discipline to become fluid between representation and abstraction, merging divergent approaches. This project is inspired by historic paintings ranging from the turbulent stormscapes of J.M.W. Turner (Romanticism), to the color-field paintings of Mark Rothko (Abstract Expressionism), and monochrome works by Robert Ryman (Minimalism). I am particularly interested in the aesthetic quest for the sublime in the disparate Romantic and Abstract Expressionist philosophies.

The exhibition of Arrangement for a Silent Orchestra includes my own live violin performance. As a classically trained violinist, the performance aspect is central to the project through the inclusion of music practice in my daily studio practice and in public exhibition. I am departing from Classical musical literature to a Modernist composition—Arvo Pärt’s Fratres—in keeping with the theme of the painting project.